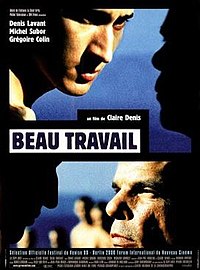 Beau Travail (, French for "good work") is a 1999 French film directed by Claire Denis that is loosely based on Herman Melville's 1888 novella Billy Budd. The story is set in Djibouti, where the protagonists are soldiers in the French Foreign Legion. Parts of the soundtrack of the movie are from Benjamin Britten's opera based on the novella.

The film begins with the silhouettes of soldiers being ordered to stand in the sun as an endurance test. It is a recollection of Adjudant-Chef Galoup (Denis Lavant), from his home in Marseille, where he is writing his memoirs. He remembers the heat of Djibouti, where he led his section of men under the command of Commandant Bruno Forestier (Michel Subor). We see numerous training scenes, including assault courses and the securing of buildings. Much of the reminiscence has a balletic quality; many of these reminiscences are set against a back-drop of the traditional, local Djibouti life. Galoup has a beautiful young local girlfriend and they often go out dancing.