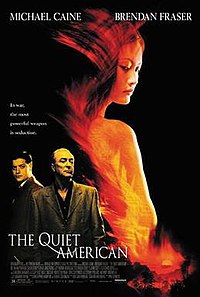 The Quiet American is a 2002 film adaptation of Graham Greene's bestselling 1955 novel set in Vietnam, The Quiet American. It was directed by Phillip Noyce and starred Michael Caine, Brendan Fraser, and Do Thi Hai Yen.

The story is set in 1952 in Saigon, Vietnam (French Indochina at that time), toward the end of the First Indochina War (1946–1954) in which French forces fought the Communist-led Viet Minh rebels. On one level, The Quiet American is a love story about the triangle that develops between Thomas Fowler, a British journalist in his fifties; a young American idealist, supposedly an aid worker, named Alden Pyle; and Phuong, a Vietnamese woman. On another level it is also about the growing American involvement that led to the full-scale American war in Vietnam.