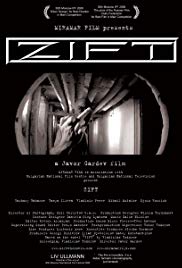 Zift (, Dzift) is 2008 black-and-white Bulgarian drama film that combines neo-noir and black comedy with socialist retro motifs; it is based on Vladislav Todorov's 2006 same-named novel and he also wrote the script. Zift was directed by Javor Gardev and premiered on 27 June 2008 at the 30th Moscow International Film Festival, where it won a Silver George for Best Director and the Best Film Prize of the Russian Film Clubs Federation.