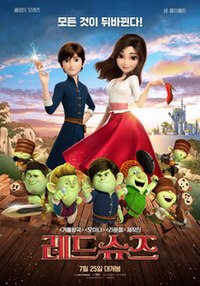 Red Shoes and the Seven Dwarfs 2019

Red Shoes and the Seven Dwarfs is a 2019 English-language South Korean computer-animated fantasy film produced by Locus Corporation. It is based on the German fairy tale Snow White by the Brothers Grimm and its name is derived from the Danish fairy tale The Red Shoes. The film features the voices of Chloë Grace Moretz, Sam Claflin, Gina Gershon, Patrick Warburton, and Jim Rash.

A group of heroic princes called the Fearless Seven (F7) - Merlin, Arthur, Jack, Hans, and triplets Pino, Noki and Kio - save a Fairy Princess from a dragon. Once they see her face however, they assume she is a witch and attack her. To teach them a lesson, she curses them to transform into dwarfs whenever people look at them and they can only undo it if they receive a kiss from "the most beautiful woman in the world".