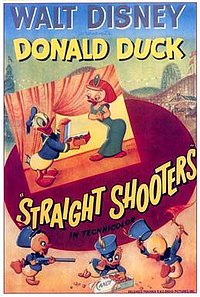 Donald runs a shooting gallery. His nephews come by and he offers them a free shot, but when the first one hits all the targets, the notoriously cheap Donald switches a cheap prize for the correct one. He then gives the other two boys gimmicked guns; the last one is empty, but the targets break anyway because one boy is hitting them from behind. Donald chases them off; they use the mystic's booth next door to get revenge.