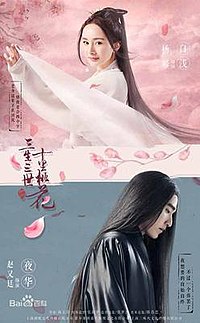 Eternal Love, also known as Three Lives Three Worlds, Ten Miles of Peach Blossoms, is a 2017 Chinese television series starring Yang Mi and Mark Chao. It is based on the xianxia novel of the same name (released as To the Sky Kingdom in English) by Tang Qi Gong Zi. The series was broadcast on Zhejiang TV and Dragon TV from 30 January to 1 March 2017.