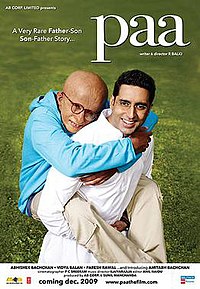 Paa (Hindi: पा, English: Father) is a 2009 Indian Hindi-language comedy-drama film directed by R. Balki, starring Amitabh Bachchan, Abhishek Bachchan, and Vidya Balan. The film is based on the relationship of a boy with a rare genetic condition known as progeria and his parents. Amitabh Bachchan and Abhishek Bachchan, in real life, are father and son respectively, but in Paa, they played opposite roles. The film was released worldwide on 4 Dec 2009. Veteran composer Ilaiyaraaja scored the music. The film was critically acclaimed in India and fared well at the box office. Despite a warm reception from Indian film critics, the film received mixed reviews from overseas film critics, according to the websites Metacritic and Rotten Tomatoes.

Auro (Amitabh Bachchan) is an intelligent and witty 12-year-old boy with an extremely rare genetic disorder called progeria. Mentally he is twelve and very normal, but physically he looks five times older. In spite of his condition, Auro is a very happy boy. He lives with his mother Vidya (Vidya Balan), who is a Gynaecologist. Amol Arte (Abhishek Bachchan) is a young, cold-blooded politician. He is out to prove to the world that "politics" is not a bad word. He is a man with a mission. Auro is Amol's son; however, Vidya conceals this from him. Amol meets Auro when he visits Auro's school as a chief guest. He comes on the occasion of a competition on the "visionary of India". Amol decides Auro as the winner, impressed by the white globe he made. But being seen with such a prominent politician Auro is found by the media. The next day the media tries to enter his school. Auro, annoyed at this, sends him an e-mail, which says "I hate you". Amol reads it and obtains a restraining order from the High Court stating that nobody can disturb him without permission. Auro, relieved, tells him of his desire to visit the president's house. But due to Amol's political issues he fails to show up on the appointed day. Auro, however, loses confidence in him but later agrees to go to Delhi with him although he now knows that Amol is his father. Though Amol does not know that Auro is his son, he takes him to Delhi to see the president's house. Auro says that he still needs to forgive Amol for his first mistake (not accepting him), but he doesn't tell him what it is. When on his 13th birthday he is in hospital he tells his father that he, Auro, is his father's mistake. Auro tries to get his mother and father back together, but Vidya resists, still hurt by the fact that Amol wanted her to have an abortion when they first found out she was pregnant. Amol realises his mistake though, and proposes to Vidya, as he is still in love with her. He stays by Auro's side when he finds out that Auro is his son. Auro's health begins to deteriorate as he reaches his 13th birthday, his physical defects catching up. However, he is finally able to reunite his mother and father once again as Vidya gives in to her feelings for Amol and her motherly love for Auro. They perform the first wedding rites in the hospital in front of their dying son, implying that they will do the rest later. Auro, succumbing to his disease, says his last words "Maa" to Vidya and "Paa" to Amol before dying with a satisfied smile. The movie ends in the rain with Vidya mourning Auro's death as Amol comforts her as she remembers Auro dancing.