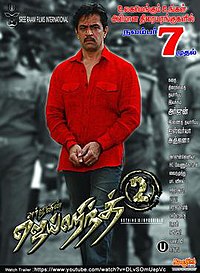 Jaihind 2 (in Hindi; ), also known in Tamil as Arjunin Jai Hind 2, is a 2014 Indian multilingual action-masala film produced and directed by Arjun. It is a sequel of the Tamil film Jai Hind. and was simultaneously made in Kannada, Tamil, and Telugu, with the former version titled as Abhimanyu. The film focuses on India becoming a superpower, as it appeared in A. P. J. Abdul Kalam's dreams, and tries to tackle the issues in the education system. The film released on 7 November 2014. This film won the Karnataka State Film Award for Second Best Film. This film was a blockbuster at the Sandalwood box office, but did not perform well in Tamil and Telugu.

Jaihind tells the story of the journey of five people, linked by one man, who fights for children's rights to education. Parvathi (Yuvina Parthavi), from a very poor family background, gets an admission into one of the most affluent schools in the city. However, the man of the house is forced to sell one of his kidneys in order to pay the exorbitant school fees. They still are unable to raise nearly enough money for the school, and they finally give up and commit suicide. This disturbs Abhimanyu (Arjun Sarja) deeply, and the computer service engineer becomes a hero overnight, by propagandizing a solution for education costing so much. Abhimanyu suggests that all private schools be nationalised, which will compel them to offer services at very little fees compared to that being collected now, while still ensuring that the quality of education is not compromised. This is bad news for the private school owners, who make a business out of educating children. Abhimanyu is targeted and pushed to extremes for his ideas. He is put behind bars and has people conspiring to murder him. How he succeeds in his mission, despite all this, forms the crux of the movie.