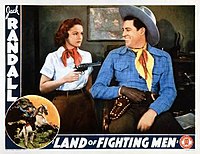 Cowboy Jack Lambert is accused of murdering a rancher, now in order to prove his innocence he has to find the real killer.