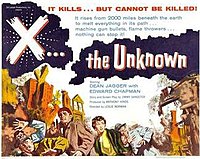 X the Unknown is a 1956 British science fiction horror film directed by Leslie Norman and starring Dean Jagger and Edward Chapman. It was made by the Hammer Film Productions company and written by Jimmy Sangster. The film is significant in that "it firmly established Hammer's transition from B-movie thrillers to out-and-out horror/science fiction" and, with The Quatermass Xperiment (1955) and Quatermass 2 (1957), completes "an important trilogy containing relevant allegorical threads revealing Cold War anxieties and a diminishing national identity resulting from Britain's decrease in status as a world power".

The film takes place in the Lochmouth region of Scotland, near Glasgow. Members of a group of soldiers are taking turns using a Geiger counter to find a small and harmless hidden source of radioactivity in a wide pit area. Private Lansing (Kenneth Cope) finds another mysterious source of radiation where ground water starts to boil. As the other soldiers begin to run, there is an explosion. Lansing, who was closest to the explosion, dies of radiation burns while another soldier has bad radiation burns to his back. At the site of the explosion, there is a Y-shaped crack in the ground with no apparent bottom. Dr. Royston (Dean Jagger), from a nearby Atomic Energy Laboratory at Lochmouth, is called in to investigate, along with Mr. "Mac" McGill (Leo McKern), who runs security at the UK Atomic Energy Commission.