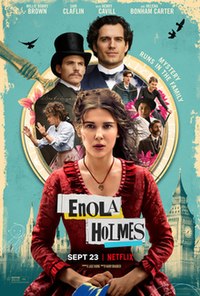 Enola Holmes is a 2020 mystery film based on the first book in the young adult fiction series of the same name by Nancy Springer. The story is about the teenage sister of the already-famous Sherlock Holmes, who goes to London in search of her mother who has disappeared. The film is directed by Harry Bradbeer, from a screenplay by Jack Thorne. Millie Bobby Brown stars as the title character, while also serving as a producer on the film. Henry Cavill, Sam Claflin, Adeel Akhtar, Fiona Shaw, Frances de la Tour, Louis Partridge, Susie Wokoma and Helena Bonham Carter appear in supporting roles.

Enola Holmes is the youngest sibling in the famous Holmes family. She is extremely intelligent, observant, and insightful, and defies the social norms for women of the time. Her mother, Eudoria, has taught her everything from chess to jujitsu and encouraged her to be a strong-willed and independent thinking young woman.