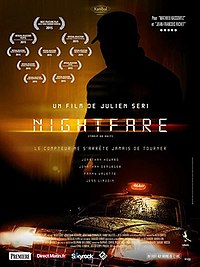 Night Fare is a 2015 French action-thriller film directed by Julien Seri. Jonathan Howard and Jonathan Demurger star as friends who antagonize a Paris taxi driver (Jess Liaudin) by not paying the fare. The taxi driver chases them through the city, killing several people who get in his way.

Englishman Chris returns to Paris after abruptly leaving two years ago. He meets his ex-girlfriend, Ludivine, and friend, Luc, frustrated to learn they are now dating. Luc takes them to a party, where Chris talks to Ludivine. She reminds him that he left without any explanation and says she is over him. Ludivine takes Luc's car when she leaves early. Upset, Chris also leaves the party, and Luc follows him, attempting to persuade him to attend another party. As they drunkenly walk through Paris, Luc suggests they steal a car. Chris refuses and suggests getting a taxi instead. Luc snorts cocaine in the cab, further upsetting Chris. The driver does not react and remains silent during the entire trip, unnerving them. Luc says he needs to get money from an ATM but runs off, laughing. Chris apologetically flees the cab, joining Luc.