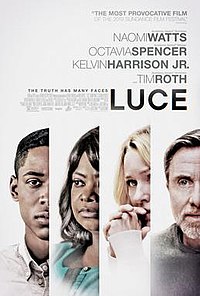 Luce is a 2019 American social thriller drama film directed, co-produced, and co-written by Julius Onah. It stars Naomi Watts, Octavia Spencer, Kelvin Harrison Jr., and Tim Roth. The film was based on the play of the same name by J.C. Lee, and tells the story of a couple (Watts & Roth) forced to reconsider their marriage and their family after an extremely disturbing essay written by their adopted son (Harrison Jr.) is brought to their attention by his teacher (Spencer).

Born in war-torn Eritrea and adopted in the United States, Luce Edgar is an all-star high school athlete and accomplished public speaker who is adored by other school students and his adoptive parents, Peter and Amy Edgar. However, he has animosity towards his history teacher, Harriet Wilson, who got his friend DeShaun kicked off the running team after finding marijuana in his locker and calling the police.