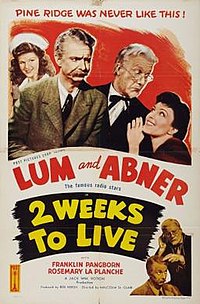 Two Weeks to Live is a 1943 American Lum and Abner film directed by Malcolm St. Clair.

This time around, Abner Peabody, proud owner of the Jot 'Em Down general store in Pine Ridge, Arkansas, inherits railroad stock from his Uncle Ernest. Because of this, he becomes the sole owner of the C&O Railroad. He assumes that it is the Chicago and Ohio Railroad. His general store partner, Lum Edwards, quickly involves himself in the business by appointing himself president. Lum comes up with the idea of selling some of the stock to the town's inhabitants, thus getting money to buy the land on which the railway is built and its surroundings.