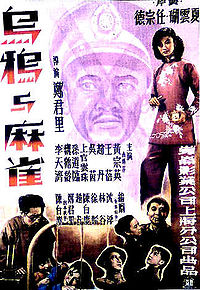 Crows and Sparrows is a 1949 Chinese film made by the left-leaning Kunlun Studios on the eve of the Communist victory, directed by Zheng Junli and scripted by Chen Baichen. Notable for its extremely critical view of corrupt Nationalist bureaucrats, the film was made as Chiang Kai-shek's Nanjing-based government was on the verge of collapse, and was not actually released until after the Chinese Civil War had ended.

In the winter of 1948, the Kuomintang of China (KMT) is losing in the Huai Hai Campaign with Communist Party of China (CPC) during the Civil War. Kuomintang government officials start to persecute the people more severely to keep their the original luxurious life. At a Shanghai shikumen house, Mr. Hou, a former Hanjian (Section chief of the Kuomintang defense department) and now an opportunist KMT official, is planning to sell the house which he seized from the owner Kong Yuwen, and then about to fly to Taiwan. His mistress, Yu Xiaoying or so-called Mrs. Hou, gives an ultimatum to the rest of the tenants to move out.