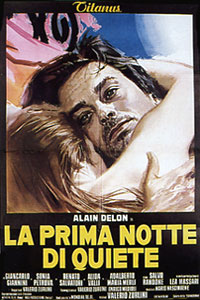 La prima notte di quiete, released in USA as Indian Summer (from the phrase Der Nachsommer, an insignia of Goethe) is a 1972 Italian and French drama film directed by Valerio Zurlini. It is starred and produced by Alain Delon. In France and Germany it runs less than the Italian cut. It is known and available on DVD in France as Le Professeur (The Professor) and in Germany as Oktober in Rimini (October in Rimini).

While a teacher is on sick leave, despite his dishevelled appearance and an employment history with unexplained gaps, Daniele is hired to take a class in Rimini. To get to know his pupils, he asks them to write a free essay or, if they prefer, one on the writer Manzoni. To his surprise, only one chooses the latter, the quiet and very attractive Vanina, who increasingly absorbs his attention. He talks to her when he can and gives her the book Vanina Vanini by Stendhal. In his free time, he leaves his partner Monica to herself (they sleep apart) while he gets to know a group of local men who enjoy drinking, gambling, recreational drugs, fast cars and easy women. Prominent among them are a crooked businessman Gerardo, who drives an ostentatious Lamborghini and is the lover of Vanina, and Spider, a gay pharmacist who is secretly a devout Catholic and lover of poetry.