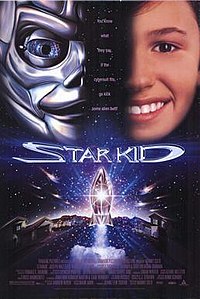 Spencer Griffith is a shy boy in seventh grade. He has a crush on a schoolmate named Michelle. His life changes one night when a mysterious meteorite crashes into a nearby junkyard. Sneaking out of his house to investigate the site, he discovers the meteorite to actually be a small rocket carrying a "Cyborsuit.", a prototype exoskeletal-suit with AI (short for Artificial intelligence) from another galaxy. He decides to try it on and melds with it, but requires some time to adjust to the experience, including the new speed and strength. He then tests out many of the suit's primary functions and abilities, and decides to call it "Cy". He proceeds to go around town doing whatever he wants, starting with getting back at a bully from school named Turbo, then saving Michelle and her friends from a damaged Rock-O-Plane and ordering food from a fast-food restaurant drive-thru. He also endures the hilarious antics of trashing part of his house after getting his head stuck inside of the refrigerator, discovering the unappealing way that the suit will allow for him to eat his ordered drive-thru food, and finding a way to pee when Cy won't let him out to do it.