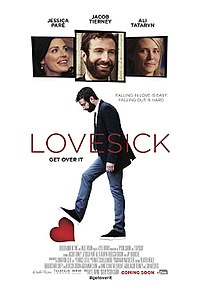 Lovesick is a Canadian romantic comedy film, released December 2, 2016. The film has a running time of 93 minutes, and was filmed in various sections of Winnipeg, Manitoba, Canada. Lovesick, was written and directed by Winnipeg filmmaker Tyson Caron, in which he made his directorial debut.

Dash is a man obsessed with trying to win back his ex-girlfriend Lauren, even though she is now engaged to Mark. Dash enters therapy and seeks counselling from a professional psychologist in order to finally acknowledge his issues at hand. At the hospital, Dash meets Nora, a recovering alcoholic and is exposed to new feelings and is forced to confront whether he really knows what he wants. He is submerged in a constant cycle of unrequited love. He is required to decide what is best for him and make a decision that will ultimately affect the rest of his life.