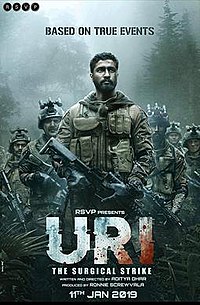 Uri: The Surgical Strike is a 2019 Indian Hindi-language action film written and directed by debutant Aditya Dhar and produced by Ronnie Screwvala under the RSVP Movies banner. A fictionally dramatised account of the true events of the retaliation to the 2016 Uri attack, the film stars Vicky Kaushal, Yami Gautam, Mohit Raina, Kirti Kulhari and Paresh Rawal in pivotal roles, and tells the story of Major Vihaan Singh Shergill of the Para Special Forces, who played a leading role in the events.

The film is divided into five chapters.