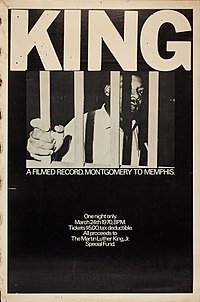 King: A Filmed Record... Montgomery to Memphis is a 1970 American documentary film biography of Martin Luther King Jr. and his creation and leadership of the nonviolent campaign for civil rights and social and economic justice in the Civil Rights Movement. It uses only original newsreel and other primary material, unvarnished and unretouched, and covers the period from the Montgomery bus boycott of 1955 and 1956 through his assassination in 1968. The original newsreel segments are framed by celebrity narrators Harry Belafonte, Ruby Dee, Ben Gazzara, Charlton Heston, James Earl Jones, Burt Lancaster, Paul Newman, Anthony Quinn, Clarence Williams III, and Joanne Woodward. The movie was produced by Ely Landau and directed by Sidney Lumet (the only documentary he directed) and Joseph L. Mankiewicz. Richard J. Kaplan was the associate producer in charge of production.