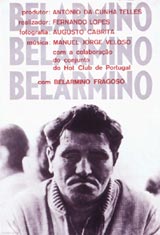 Belarmino is a 1964 Portuguese docufiction. It charts the life and times of ex-boxer Belarmino Fragoso. It is one of the first films of the Portuguese Cinema Novo, itself part of a wave of New Cinemas sweeping the world in the 1960s, and a break from the previous tradition of Portuguese cinema exemplified by the comédia à portuguesa. Lopes's film was shown at the festivals of Pesaro and Salso-Poretta in Italy, garnered favourable reviews throughout Europe and won the Prémio da Casa da Imprensa back in Portugal.