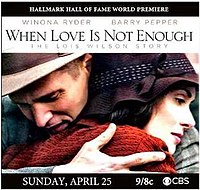 When Love Is Not Enough: The Lois Wilson Story 2010

When Love Is Not Enough: The Lois Wilson Story is a 2010 American film that premiered on CBS on April 25, 2010. The film was produced by Terry Gould, directed by John Kent Harrison and written by William G. Borchert, who based the script on his novel of the same name.

In 1914 Lois W.Lois Burnham, a college-educated woman from an affluent family, meets and falls in love with Bill Wilson, a 19 year old man of modest means. They marry in 1918 and after his return from World War I, the two set out to build a life together.