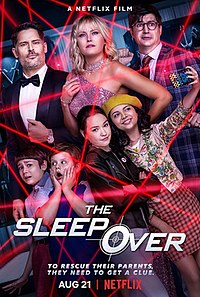 The Sleepover is a 2020 American action comedy film directed by Trish Sie, from a screenplay by Sarah Rothschild. It stars Sadie Stanley, Maxwell Simkins, Cree Cicchino, Lucas Jaye, Ken Marino, Joe Manganiello and Malin Åkerman. The film was released on August 21, 2020 by Netflix.

Clancy Finch is invited by her crush Travis Schultz to a party at his house. Her brother Kevin is caught dancing in the restroom by some older students who record him dancing and bully him, but Clancy's and Kevin's mother Margot, the lunch monitor, scares them away. The bullies upload a remix video of Kevin dancing and Margot admonishing them to YouTube, where it quickly goes viral, gaining over two million views.