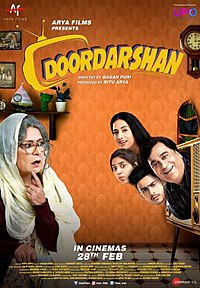 Doordarshan is a 2020 Indian Hindi-language comedy-drama film directed by Gagan Puri and produced by Arya Films (Ritu Arya). The film stars Mahie Gill and Manu Rishi Chaddha. The film was released in theatres on 28 February 2020, and subsequently was released on Netflix on 27 July 2020.

Sunil Bhateja lives with his young daughter Sweety and son Sunny and is going through a rough phase with his estranged wife who is demanding a divorce from him. His mother Darshan is in a state of coma for the last 30 years and the rented place belongs to his friend Goldie. Sunil is not willing to vacate the home on the pretext of the state of his mother.