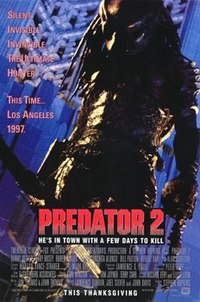 Predator 2 is a 1990 American science fiction action film written by brothers Jim and John Thomas, directed by Stephen Hopkins, and starring Danny Glover, Gary Busey, Ruben Blades, María Conchita Alonso, Bill Paxton, and Kevin Peter Hall. It is the second installment of the Predator franchise, serving as a sequel to 1987's Predator, with Kevin Peter Hall reprising the title role of the Predator. Set ten years after the events of the first film, in Los Angeles, the film focuses on the Predator, a technologically advanced extraterrestrial hunter, and the efforts of a disgruntled police officer and his allies to defeat the malevolent creature.

In 1997, Los Angeles is suffering from both a heat wave and a turf war between heavily armed Colombian and Jamaican drug cartels. A Predator watches a shootout between the police, Jamaicans, and Colombians, observing as Lieutenant Michael R. Harrigan charges into the firefight to rescue two wounded officers and drive the Colombians back into their hideout. The Predator assaults the Colombians, causing a disturbance that prompts Harrigan and detectives Leona Cantrell and Danny Archuleta to defy orders and enter the hideout, where they find the slaughtered Colombians. On the roof, Harrigan shoots the crazed gang leader and catches a glimpse of the camouflaged Predator, but dismisses it as a consequence of the extreme heat and his acrophobia. At the station, Harrigan is reprimanded by his superiors for his disobedience and introduced to Special Agent Peter Keyes, leader of a task force investigating the cartels, and Detective Jerry Lambert, the newest member of Harrigan's team.