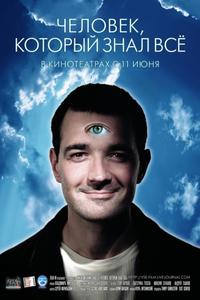 The Man Who Knew Everything 2009

The Man Who Knew Everything is a 2009 Russian film directed by Vladimir Mirzoyev on the same name novel by .

Alexander Bezukdalnikov, as a result of an attempt to commit suicide, suddenly finds the phenomenal ability to instantly get an answer to any question. Modest and harmless, he becomes a good game for all — women, criminal authorities and even international intelligence services. Some try to use it, others destroy it. But the little man continues to live according to the laws of his own conscience.