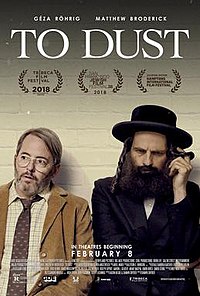 To Dust is a 2018 American comedy-drama film directed by Shawn Snyder and starring Géza Röhrig and Matthew Broderick, Leo Heller and Sammy Voit. It was produced by Emily Mortimer, Alessandro Nivola and Ron Perlman. The film premiered at the Tribeca Film Festival on 22 April 2018 followed by screenings at the San Francisco Jewish Film Festival and the Hamptons International Film Festival.

American Hasidic Jew, Shmuel, loses his beloved wife, Rivka, to cancer. Now he lives with his mother, two sons, and a terrible longing. While his mother advises Shmuel to "move on" and marry again, the children think that a dibbuk, the spirit of Rivka, has moved into their father. Longing and excitement drive Shmuel to look for answers to unexpected questions. What worries him most is the thought of what happens to his beloved wife’s body after burial and how quickly she turns to dust. To find answers and religious solace, Shmuel initially comes to a rabbi—but then forms an unlikely partnership with a professor of biology.