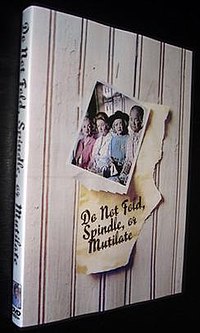 Do Not Fold, Spindle or Mutilate 1971

Do Not Fold, Spindle or Mutilate is a 1971 American made-for-television mystery film directed by Ted Post, starring Myrna Loy, Helen Hayes, Mildred Natwick, Sylvia Sidney, John Beradino and Vince Edwards, with the screenplay adapted by John D. F. Black from a novel of the same name by Doris Miles Disney. It was broadcast as the ABC Movie of the Week on November 9, 1971.

Four middle-class Pasadena ladies in their late sixties (Helen Hayes, Myrna Loy, Mildred Natwick and Sylvia Sidney) habitually meet for lunch and exchange small talk with their waitress (Dodo Denney). They propose to create a fictitious young woman and to submit her profile to a computer dating service. Several days after doing so they begin to receive letters from potential suitors, and derive additional amusement from reading them out loud.