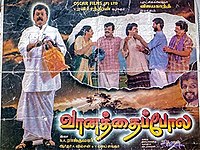 Vaanathaippola is a 2000 Indian Tamil-language family drama film written and directed by Vikraman. The film features Vijayakanth in dual lead role, Meena, Prabhu Deva, Livingston, Kausalya and Anju Aravind. Produced by Venu Ravichandran under Oscar Films, the film has a score and soundtrack composed by S. A. Rajkumar and cinematography handled by Arthur A. Wilson. The film tells the story of a caring brother who makes sacrifices to ensure his three younger brothers succeed in life.

Vellaichaamy (Vijayakanth) thinks the world of his three brothers, even giving up marriage when he learns that the woman he loves plans to send them to a hostel after the wedding. The brothers live with their grandmother (S. N. Lakshmi). Vellaichamy works hard to raise them, and they too reciprocate his love and affection. The eldest of the three, Muthu (Vijayakanth, in a double role), is a cook in a small hotel. When Vellachamy learns that Muthu is in love with his childhood playmate Gowri (Meena), he goes to the city to his friend (Rajeev) with the marriage proposal, only to be insulted. Circumstances bring Muthu to the city, to Gowri's palatial bungalow where he works as a cook. Gowri is arrogant and rude until she realizes that Muthu is her childhood friend, who she had been very close to. Noticing his humble nature, she falls in love with him and persuades her father to get her married to Muthu.