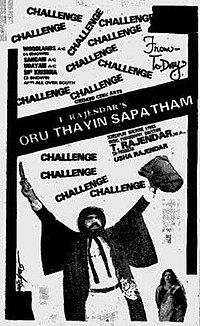 Oru Thayin Sabhatham is a 1987 Tamil drama film written, directed, composed and produced by T. Rajendar. Rajender himself appeared in the title role with Srividya, whilst the film featured an extensive cast, which also featured Rajendar's son Silambarasan. The film released on 14 April 1987. It is a remake of the 1985 Hindi film Meri Jung.

SR (Senthamarai) is a leading criminal lawyer who tastes only success in all his cases and has the ability to twist the court proceedings in his favour. In one such case, he joins hands with a few baddies and tactfully frames an innocent Thyagarajan (Jaishankar) in a murder case and gets death penalty for him. Thyagarajan's wife Srividya along with her children (a son and a daughter) pleads with SR but in vain. Thyagarajan is hanged to death and Srividya goes missing while everyone assumes her to be dead as well. Srividya's children are adopted by a good natured lawyer and raises them as his own kids. Years later, the son grows up to be Rajkumar (T. Rajendar), a leading advocate.