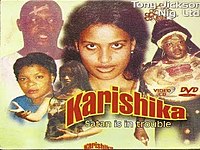 A man waits outside a hospital's delivery room, minutes later a nurse comes out to tell him that his wife gave birth to a yam tuber. He immediately leaves the hospital in anger. This would lead to a fall out between him and his wife upon her discharge from the hospital. Following a heated argument, she hits him with a pestle and he falls to the ground dead. Karashika appears and asks her to hang herself, which she did, and she is taken to hell by Karashika.