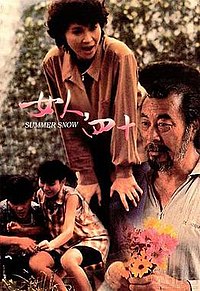 Summer Snow (, Cantonese: Loey Yen Sei Seup, Mandarin: Nu ren si shi, also known as Woman, Forty) is a 1995 Hong Kong comedy-drama film directed by Ann Hui. It stars Josephine Siao and Roy Chiao in leading roles. The film was selected as the Hong Kong entry for the Best Foreign Language Film at the 68th Academy Awards, but was not accepted as a nominee.

Summer Snow tells the story of the relationship between a widower with Alzheimer's disease and his daughter-in-law, May Sun, who is a housewife in her forties trying cope with the upheavals in her family. Her supportive mother-in-law has just died and her husband, who is a driving test examiner, is not giving her the support.