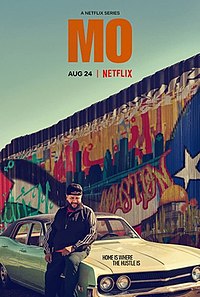 Mo is an American comedy-drama streaming television series that premiered on August 24, 2022 on Netflix. The series stars Mo Amer as the titular character. The series is loosely based on Amer's own life as a Palestinian refugee living in Houston, Texas. It is co-created by Ramy Youssef and also stars Farah Bsieso, Omar Elba, Teresa Ruiz and Tobe Nwigwe.

Mo follows a Palestinian refugee living in Houston, Texas, who is currently seeking asylum and citizenship in the United States.