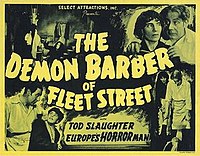 Sweeney Todd: The Demon Barber of Fleet Street is a 1936 British drama horror film produced and directed by George King, and written by Frederick Hayward, H.F. Maltby, and George Dibdin-Pitt. The film features actor Tod Slaughter in one of his most famous roles as the barber Sweeney Todd.

The film starts in 1936 as a barber tells a patron the story of the infamous Sweeney Todd.