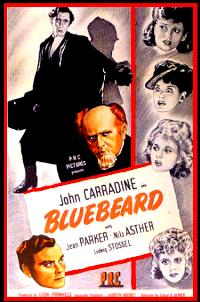 Bluebeard is a 1944 film noir directed by Edgar G. Ulmer, starring John Carradine in the title role. The film also stars Jean Parker. The film is based on the famous French tale Barbe bleue that tells the story of a violent nobleman in the habit of murdering his wives and the attempts of one wife to avoid the fate of her predecessors. The film is registered in the public domain.

All Paris is frightened by the murders attributed to "Bluebeard". Modiste Lucille (Jean Parker) is introduced to Gaston Morrell (John Carradine), a puppeteer and painter, by her friend. They are attracted to each other, and she accepts a commission to design some costumes for his puppets.