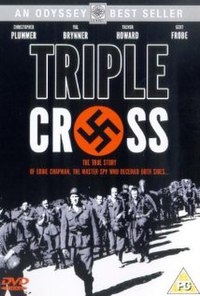 Triple Cross is a 1966 Anglo-French war spy film directed by Terence Young and produced by Jacques-Paul Bertrand. It was released in France in December 1966 as La Fantastique histoire vraie d'Eddie Chapman, but elsewhere in Europe and the United States in 1967 as Terence Young's Triple Cross. It was filmed in Eastman Color, print by Technicolor.

Early in the Second World War, debonair safecracker Eddie Chapman (Christopher Plummer) blows open a wall safe. Outside, a car is backfiring repeatedly and a marching band is passing, which mask the blast. Chapman casually removes some jewels from the safe and examines them for the choicest items. He leaves a card in the safe complimenting its owners for being victims of the "Gelignite Gang". The gang pulls off a series of heists before Chapman is caught while on holiday on the island of Jersey, where he is imprisoned. After ten months, he sees German soldiers landing outside the prison and learns that war has broken out.