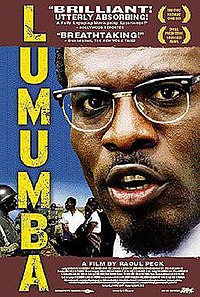 Lumumba is a 2000 film directed by Raoul Peck centred on Patrice Lumumba in the months before and after Congo-Léopoldville achieved independence from Belgium in June 1960. Raoul Peck's film is a coproduction of France, Belgium, Germany, and Haiti. Political unrest in the Democratic Republic of the Congo at the time of filming caused the film to be shot in Zimbabwe and Beira, Mozambique.

The plot is based on the final months of Lumumba (played by Eriq Ebouaney), the first Prime Minister of the Republic of the Congo, whose tenure in office lasted two months, until he was driven from office. Joseph Kasa-Vubu (Maka Kotto) is sworn in as the first President of the country, alongside Lumumba as Prime Minister. Together, they attempt to prevent the Congo succumbing to secession and anarchy. The film concludes with Joseph Mobutu (Alex Descas) seizing power.