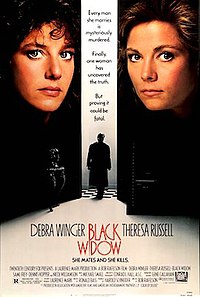 Black Widow is a 1987 American neo-noir thriller film directed by Bob Rafelson, from a screenplay by Ronald Bass. It stars Debra Winger, Theresa Russell, Sami Frey, and Nicol Williamson. Dennis Hopper has a short role at the beginning of the film.

The story centers on two women. Catharine is a psychopathic femme fatale who preys on wealthy middle-aged men, seducing them into marriage and then fatally poisoning them. Each death is misdiagnosed as Ondine's curse, a condition by which seemingly healthy middle-aged men die in their sleep. Justice Department agent Alexandra "Alex" Barnes stumbles onto the first murder while investigating another case. As Alex delves further into the case, she uncovers a pattern which she believes ties the same woman to several similar murders.