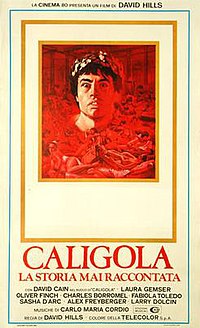 Caligula... The Untold Story (original Italian title: Caligola... la storia mai raccontata; "Caligula... the story never told") is a 1982 historical exploitation film starring David Brandon and Laura Gemser. Written by George Eastman and Joe D'Amato, and produced, directed and shot by Joe D'Amato, it was created to cash-in on the success of Tinto Brass's Caligula without being a sequel or remake.

Roman Emperor Gaius Caesar Caligula, alone in his bed, is plagued by nightmares in which a man, his head covered in a helmet, tries to shoot him with an arrow. The poet Domitius approaches and tries to assassinate him with a dagger, but the attempt is thwarted by Ulmar, Caligula's bodyguard. Domitius ends up losing his tongue and having his tendons cut at Caligula's behest.