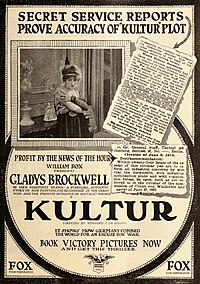 Kultur is a 1918 American silent film directed by Edward J. Le Sainte starring Gladys Brockwell in the lead role as Countess Griselda Von Arenburg. No copies of the film are known to exist per the Library of Congress.

The film tells of a German plot to start the First World War, with the Kaiser's mistress asking her servant to assassinate Archduke Franz Ferdinand and the subsequent cover-up that ensues.