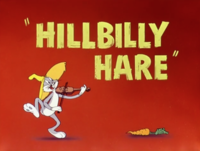 Hillbilly Hare is a Merrie Melodies cartoon featuring Bugs Bunny, produced and released by Warner Bros. Pictures. It was directed by Robert McKimson and released on August 12, 1950.

Bugs Bunny is vacationing in the Ozarks and stumbles into the territory of two hillbilly brothers, Curt and Punkinhead Martin. The brothers figure Bugs as being a member of the clan they are feuding with and make several attempts to shoot him. Bugs foils them each time. Curt and Punkinhead are determined to get revenge on Bugs for their humiliation. Bugs easily outsmarts them and eventually, dressed as an attractive hillbilly girl, tricks them into doing a square dance. The dance tune starts as a straightforward version of "Skip to My Lou" played and called by the jukebox band, "The Sour Belly Trio". Shortly into it, Bugs deliberately unplugs the jukebox, removes the dress and takes over fiddling and square dance calling, still to the melody and rhythm of the song, but manipulating the Martins through a series of slapstick comedy gags. Bugs proceeds to assign the Martins increasingly bizarre and violent directives, which the brothers unquestioningly follow with hilarious results. Finally, with the Martins having promenaded off a cliff, Bugs finishes the dance by having the Martins groggily bow to each other (before collapsing due to exhaustion from the whole "dance") and saying, "And THAT is all!" and playing six final notes on the fiddle, before the cartoon ends.