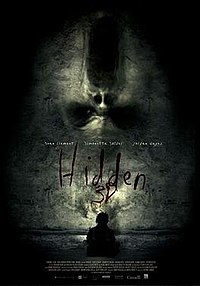 Hidden 3D is an Italian-Canadian horror film directed by Antoine Thomas and produced by Caramel Films. It was filmed in Italy and Canada over the Summer and Fall of 2010. Hidden 3D was filmed in both 2D and 3D Technologies.

When Brian Carter's mother dies, he is surprised to learn that he has inherited The Sanctuary, home to her controversial experimental addiction treatment center. Having previously believed that the building burned to the ground years ago, Brian travels there with a group of friends and meets Haley, a mysterious friend of his mother, who acts as their guide through the impressive, monastery-like building. During their tour it becomes clear that something sinister lies beneath the surface.