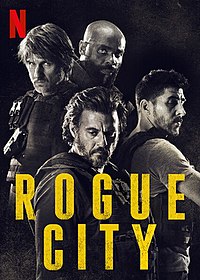 Rogue City is a 2020 French action film directed and written by Olivier Marchal and starring Lannick Gautry, Stanislas Merhar and Kaaris. It was released on Netflix on 30 October 2020.

Set in Marseille, an anti-gang police gang with unorthodox methods investigate a shooting at a nightclub alongside a longtime rival unit.