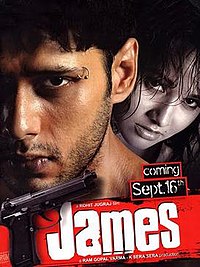 James is a 2006 Indian Hindi action film starring Mohit Ahlawat and Nisha Kothari. It was directed by Rohit Jugraj. The movie was a big disaster at the box office.

James, who comes to Mumbai seeking a successful life, ends up working as a bouncer at a club there, and fighting gangsters. He then encounters the brother of an MP who is always causing crime. James has a little fight in club which cause causes a huge conflict between the two, this also gets his brother and MP Shanthi Narayana involved. This conflict then causes death of James's friend, whom he lives with, Babloo, and because of this James is set on revenge.