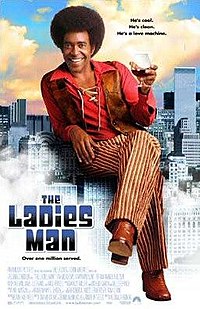 The Ladies Man is a 2000 American sex comedy film directed by Reginald Hudlin. The film stars Tim Meadows, who also wrote the film along with Dennis McNicholas and Andrew Steele. The film focuses on the exploits of radio host and sex therapy expert Leon Phelps, a character Meadows developed on SNL.

Leon Phelps (also known as the "Ladies Man") was a Saturday Night Live character played by Tim Meadows during the 1990s. The sketch was that of a broadcast program in which Phelps, a young, suave black man, would give dubious romantic advice and lovemaking tips. The Ladies Man openly proclaimed that he would court any woman at all including skanks, providing the woman weighs no more than 250 pounds. A night of romance would generally center around a bottle of Courvoisier.