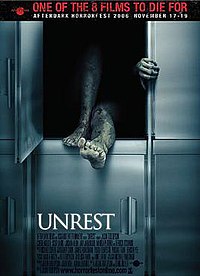 The film revolves around a cadaver who seems to bring misfortune on those who come in contact with it.