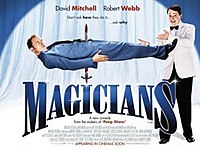 Magicians is a 2007 British comedy film released on 18 May 2007. It stars comic duo Robert Webb and David Mitchell as stage magicians Karl and Harry. The two magicians compete together in a magic competition, despite their personal differences. Parts and ideas of the film have been taken to parody the 2006 film The Prestige by Christopher Nolan, though this had not been released when Magicians was filmed (though the original novel by Christopher Priest had been published in 1995). The film is directed by Andrew O'Connor and written by Jesse Armstrong and Sam Bain, who are also the writers of the Channel 4 sitcom Peep Show, which stars Mitchell and Webb. Other principal cast members include Jessica Hynes, Darren Boyd, Steve Edge, Peter Capaldi, and Andrea Riseborough.

Harry Kane and Karl Allen are best friends who work together in a successful and popular magic double act, with Harry's wife Carol working as their assistant. After one show, however, Harry discovers Karl and Carol backstage in a magic box having sex (during an agreement between Harry and the theatre owner about letting the act go on for 4 more weeks and letting them do an act on a cruise ship). During the next show, Carol is locked into a guillotine as part of a climatic trick, only for the blade to decapitate her; it is not immediately clear whether Harry, despite his protestations of innocence, has murdered her or whether she was the victim of a freak accident. Four years later, the act has broken up and the two friends – now bitter rivals – have gone their separate ways; Harry, having given up professional magic, is working in a Wilkinson hardware store, only to be fired after a customer complains when he creates an illusion of him cutting his arm severely with a knife blade during a sales pitch, whilst Karl is attempting to reinvent himself as a Derren Brown-esque magician called the Mindmonger, with limited success. During an unsuccessful impromptu-pitch at a television corporation, the only person he manages to impress is Dani, the tea girl, who Karl immediately gets a crush on much to the jealousy of his incompetent agent Otto, who nurses an unsubtle homosexual crush on him.