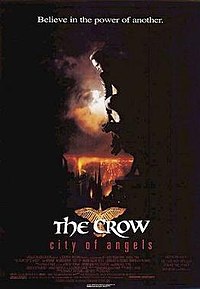 The Crow: City of Angels is a 1996 American superhero film directed by Tim Pope. It is a sequel to the 1994 film The Crow and the second installment in The Crow film series.

In Los Angeles, mechanic Ashe Corven and his eight-year-old son Danny are murdered by notorious drug kingpin Judah Earl after they witness a gang of Judah's henchmen murdering a fellow drug dealer. The two are then dumped into a harbor.