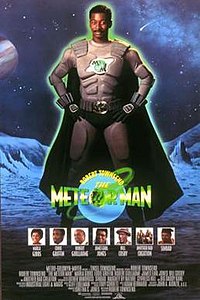 The Meteor Man is a 1993 American superhero comedy film written by, directed by, co-produced by and starring Robert Townsend with supporting roles by Marla Gibbs, Eddie Griffin, Robert Guillaume, James Earl Jones, Bill Cosby, and Another Bad Creation. The film also features special appearances by Luther Vandross, Sinbad, Naughty by Nature, Cypress Hill, and Big Daddy Kane. Townsend stars as a mild-mannered schoolteacher, who becomes a superhero after his neighborhood in Washington, D.C. is terrorized by street gangs.

Jefferson Reed (Robert Townsend) is a mild-mannered school teacher in Washington, D.C. His neighborhood is terrorized by a local gang called The Golden Lords, led by Simon Caine (Roy Fegan) and allied with drug lord Anthony Byers (Frank Gorshin). One night, Jeff steps in to rescue a woman from the gang only to end up running from them himself. Hiding in a garbage dumpster, he manages to escape. As he climbs out, he is struck down by a glowing, green meteorite. His spine is crushed and he receives severe burns. A small fragment of the meteor was left over and taken by a vagrant named Marvin (Bill Cosby). Reed awakens several days later in the hospital, but when his bandages are taken off, he is miraculously healed of all injuries.