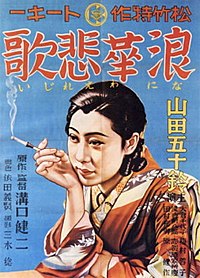 (originally Naniwa Elegy) is a 1936 Japanese film directed by Kenji Mizoguchi. Mizoguchi considered the film his first serious effort as a director, and it was also his first commercial and critical success in Japan. Osaka Elegy is often considered a companion piece to Mizoguchi's next film, Sisters of the Gion, which was released the same year and featured much the same cast and crew.

Sonosuke Asai (Benkai Shiganoya) is the owner of the Asai Drug Company. He is unhappily married to Sumiko (Yoko Umemura), and they are mutually unkind to one other. Mr Asai tries to get one of his employees, telephone operator Ayako Murai (Isuzu Yamada), to meet him for dinner. She discusses this after work with a male colleague (and apparently boyfriend), Mr Nishimura, revealing that her father is in serious difficulties: unemployed and threatened with arrest after embezzling 300 yen.